A flat panel display is a television, monitor or other display appliance that uses a thin panel design instead of a traditional cathode ray tube (CRT) design [1].

Liquid Crystal Displays (LCDs) are an important piece of flat panel technology as they are used in notebook computers. They have a very low power consumption and driving bolt (5-20V). LCDs are very thin with high contrast ratios and full-colour display capabilities. Despite the high contrast ratios, it is limited, they also require a strong backlight for low transmissivity of colour filters.

Plasma Display Panels (PDP) consists of a gaseous substance that is between two panels of glass. They are heavier and wider than LCDs because of the two glass panels and also require more electricity. PDPs can produce darker, blacks and hues which also means you have a wider viewing angle.

Light-Emitting Diode (LED) Displays are panels that use LEDs as their backlights instead of fluorescent lights. These units utilize the same liquid crystal diode technology found in LCDs, but due to the minute size of LED lighting, LED displays can be manufactured even thinner than before [2].

LCDs are composed of numerous individual parts such as: 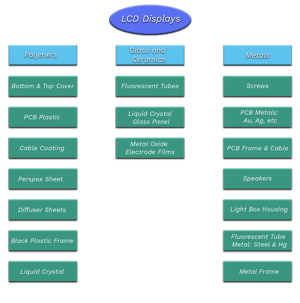 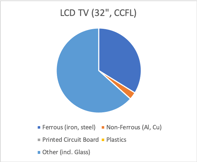 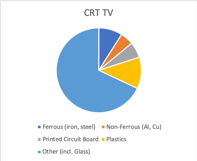 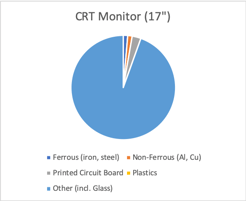 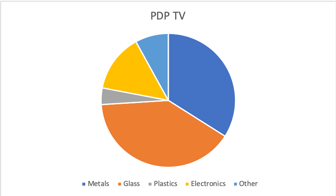 Flat-panel displays have been selling at approximately 500 million units per annum globally since the early 2000s with a 10-year lifespan and decreasing [5]. 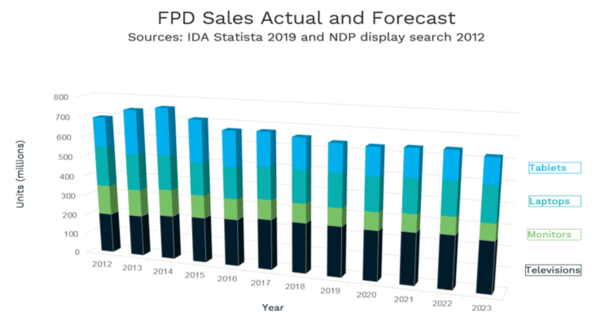 The EU and US account for approximately 100 million units each of FPD sales every year. Cathode-ray Tube (CRT) monitors have a lifespan of 10-20 years while FPD's lifespan is approximately 7-10 years. The trend shown above shows a peak in 2010 which means over the foreseeing years there will be a market for the disposal of FPDs.

North America and Europe are expected to emerge as the dominant countries contributing to the growth of the market.

Manual Disassembly involves workers themselves disassembling flat panel screens. This process involves removing the hazardous materials from backlights in FPDs. This process is still used but not efficient as one worker will disassemble approximately 5-6 screens an hour. Along with this method, there is the risk of mercury exposure, with accidents such as backlight breakages which will expose higher quantities of mercury to the working environment.

Shredding involves reducing FPDs to small pieces (example: 40-50mm). The process is aimed at the reduction of product particle size to increase the material homogeneity and make subsequent separations easier [3]. Shredding can be done through cutting, hammering, milling and grinding. After this, separation is required to divide the materials.

Incineration was used in the past when some electronic waste recycling plants dumped their partially disassembled FPDs into MSWIs. This was used as there was a lack of other recycling alternatives [4].

With the ongoing developments and progression of technology and artificial intelligence (AI), there is a new process being brought to the market on recycling your FPDs. At FPD Recycling we are the only company who provide a fully automated system. Using robotics and AI (to capture data as the FPD is dismantled) we can provide an efficient, safer, affordable process of recycling flat panel displays.